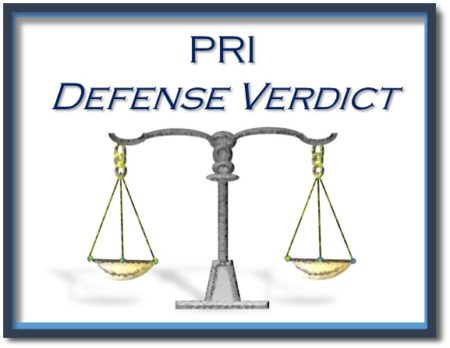 PRI obtained a defense verdict on behalf of an emergency medicine physician in a case involving an allegation of a delayed diagnosis of a Type A dissection of the thoracic aorta.

The events of the case began on September 23rd at 9 a.m. when the patient was brought in by ambulance to the emergency department with a complaint of a “popping” sensation in his chest which was accompanied by severe pain in the back and leg beginning at 8 a.m.  The attending emergency physician initially focused on the patients back pain given the patient’s stated history of chronic back pain. The emergency physician’s initial impression was back pain possibly from a disk herniation and an examination, including a neurologic examination was performed. She ordered an MRI of the spine and requested a neurology consultation. Additional tests including an x-ray of the chest, EKG and cardiac enzymes which were normal. As the attending continued to monitor the patient and consider the complaint of “popping” in the chest, she revised her differential diagnosis to include a dissecting aneurysm. A CT of the chest abdomen and pelvis was ordered at 11:40 a.m. The study was completed at 1:42 p.m. and it revealed an extensive dissection of the aorta from the thorax to the pelvis. The dissection was designated a Type A dissection. Cardiothoracic surgery was consulted and the patient underwent surgical repair 8 hours after arrival in the ED. Due to the extent of the dissection, the patient’s left lower extremity had severely reduced flow to the left femoral artery and a vascular surgeon performed a femoral – popliteal artery bypass after the surgical repair of the aortic dissection.  The vascular surgeon also performed a fasciotomy of the left lower extremity.

Following the surgeries, the patient complained of persistent lower extremity pain and weakness, including foot drop, as well as erectile dysfunction. He brought suit against the ED physician alleging that she had caused a delay in the diagnosis of his condition resulting in prolonged ischemia of his lower extremities resulting in permanent damages.

During trial the plaintiff’s attorney tried to show that the defendant did not treat the diagnosis in an emergent fashion. To support the allegation he pointed to the time between when the diagnosis was considered and when the patient actually went for surgery. The attorney claimed that the order for the CT scan was not ordered stat and the attorney produced a copy of the order noting that stat was not indicated. The plaintiff’s attorney brought forth an expert in emergency medicine who claimed that this case should have been managed as “super stat”. In defense of the emergency medicine physician, PRI’s attorneys showed that as a matter of hospital policy, all radiology orders in the emergency department are stat orders by default. In addition, each of the “super stat” steps outlined by the plaintiff’s expert witness were indeed carried out by our physician. PRI’s defense experts further testified that the defendant acted with “sound medical judgment” in establishing the diagnosis, confirming the diagnosis, and in orchestrating the surgery which saved the life of this patient. Delaying the CT scan until laboratory results were available to provide renal clearance was within the standard of care in this situation where the patient had stable vital signs. The fact that the labs took longer than typical for ED labs was not a fault of this ED physician who ordered the blood work as stat. After reviewing all the evidence, the jurors determined that PRI’s defendant emergency medicine physician had not departed from the standard of care, and a verdict in favor of the ED physician was rendered.

Defense Verdict in a Case of an Upper Gastrointestinal Bleed